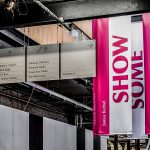 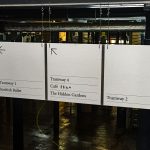 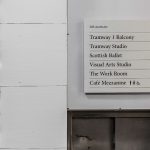 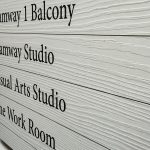 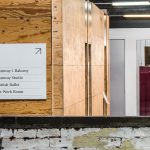 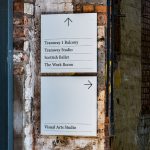 The Tramway is a contemporary visual and performing arts venue in Glasgow and home to the Scottish Ballet. It is regarded as one of the best venues of its kind in Europe.

Collaborating with designers Tangent Graphic, EVM manufactured and installed new wayfinding signage for the Tramway in preparation for the hosting the 2015 Turner Prize award and exhibition.

Set within industrial surroundings, the sharp and contemporary ‘look’ created by Tangent Graphic contrasts brilliantly against the building’s authentic interior. EVM’s highly experienced team of installers ensured a trouble free and efficient install meant everything was all right on the night!
Located in Pollokshields on Glasgow’s Southside the building was originally a former tram depot and Glasgow’s original Transport Museum. It was converted into its current use in the mid 1980’s with the Scottish Ballet taking residence in a newly built extension to the site in 2009. The venue consists of two large performance spaces and two galleries, as well as offering facilities for community and artistic projects.